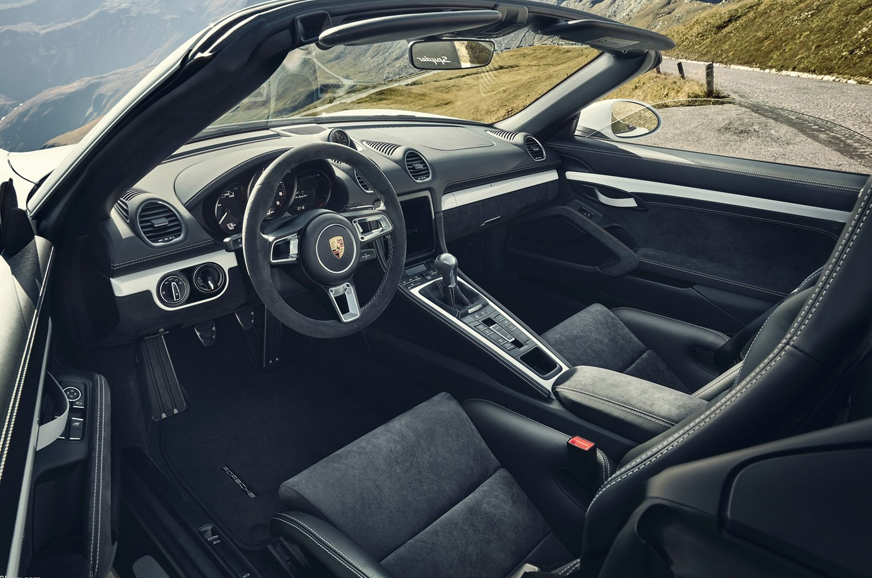 Both models are mid-engine sportscars and use a 4.0-litre, naturally aspirated flat-six engine which is paired to a 6-speed manual gearbox.

Amidst the industry-wide trend for downsizing, turbocharging and automation, Porsche’s GT division has decided to stray from this formula with its two new additions – the 718 Cayman GT4 and 718 Boxster Spyder.

A major talking point for both these mid-engine performance-focused models is that they use a new 4.0-litre, naturally aspirated, flat-six engine – up from the 3.8 litres of the previous Spyder and GT4 – which forms a new engine family called 9A2 Evo. They ditch the turbocharger found in the 991-series’ 911 Carrera but still manage to put out 420hp.

The power figure is 45hp and 35hp more than the previous Spyder and GT4, respectively. The new unit also revs out to 8,000rpm and delivers peak torque of 420Nm between a relatively high 5,000rpm and 6,800rpm. Both the 718 Cayman GT4 and 718 Boxster Spyder get a single gearbox option in the form of a 6-speed manual. This translates to both models being capable of 0-100kph in 4.4sec, with the Spyder managing a top speed of 301kph and the GT4 topping out at 303kph.

A Porsche spokesman told our sister publication Autocar UK, “If the market asks for PDK, it [an automatic version] might be feasible, but the spirit of the cars and customer demand is very much oriented to manual.”

According to Porsche it has “comprehensively improved” the GT4’s aerodynamic efficiency for the 718 model. It’s said to produce up to 50 percent more downforce than the old car without having a negative effect on drag. A new and more functional diffuser increases downforce by 30 percent at the rear, while the fixed rear wing is 20 percent more efficient than the old one. This adds up to 12kg more downforce at 200kph. Being a soft-top, the 718 Spyder is less aerodynamically efficient. However, it makes use of a rear spoiler that rises at 119kph and is the first Boxster to feature a rear diffuser and generate downforce at the rear axle.

Unlike previous generations of the Spyder and GT4, both sportscars now feature the same GT chassis underneath. They also feature race-inspired springs and struts at their front and rear axles, along with Porsche’s Active Suspension Management damping system that’s 30mm lower than standard variants. It’s claimed to be “specifically designed for use on the racetrack”.

The Porsche Stability Management (PSM) system is tweaked to be less obtrusive, and an improved torque-vectoring system is also part of the package. Both again have the option of ceramic brakes, along with the standard track-focused caliper system. The 718 Spyder also uses the same Porsche-specific Michelin-made high-performance tyres as the GT4.

Porsche claims the alterations and extra power enable the Cayman GT4 to lap the Nürburgring Nordschleife more than 10sec quicker than its predecessor.

Specific details about the interior of either car have not yet been revealed, beyond the images released by Porsche. But it’s apparent that the new GT4 retains many details of the previous version, including fabric door-pulls in place of traditional handles, body-coloured seat belts and the removal of the infotainment system, which in the old car could be reinstalled as a no-cost option. The Spyder, on the other hand, appears to retain standard door handles and its infotainment system. Each has copious amounts of Alcantara.

Porsche also offers the 718 Cayman GT4 with the option of a Clubsport package which includes a steel roll bar at the rear of the cabin, a small fire extinguisher and a six-point seatbelt for the driver’s side.

0
The Mercedes-Benz G-Class is turning 40. It's almost surprising, as sometimes it feels like the partially Austrian-designed, Puch-derived go-anywhere box on wheels has been...
Read more
LAUNCHES

0
12th Aug 2019 6:04 pm Prior to the launch of this variant, the drum brake-equipped model featured sheet-metal alloys. Suzuki has just launched an alloy-wheel version...
Read more