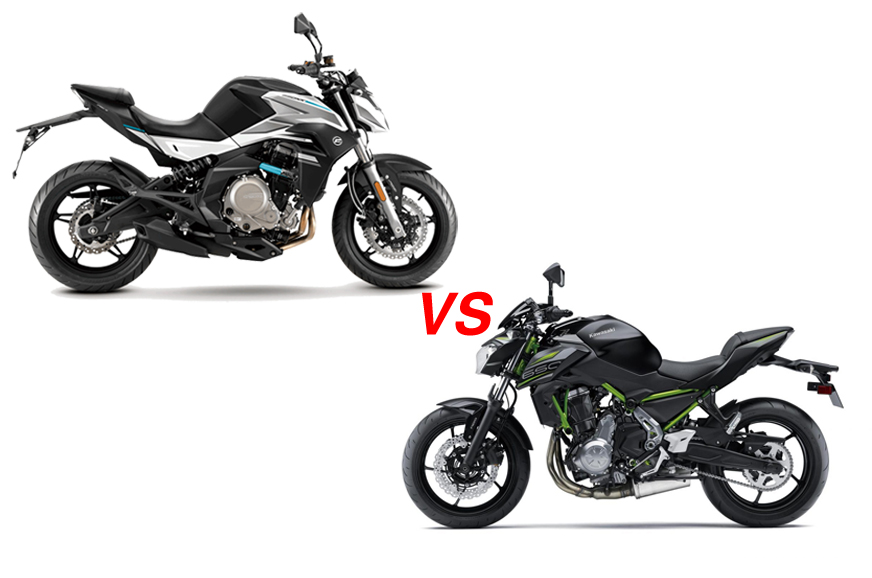 Launched at Rs 3.99 lakh, the new CFMoto 650NK has one direct rival in India: the Kawasaki Z650. We compare the two bikes on paper.

The CFMoto 650NK has just launched in India at Rs 3.99 lakh (ex-showroom, Delhi). The 650NK is part of the brand’s four-strong line-up, which includes two more 650cc bikes and a 300cc sport-naked motorcycle. Based on its specifications and price (it’s the entry-level 650cc model) the CFMoto 650NK will do battle with the Kawasaki Z650. While we wait to get our hands on the CFMoto 650NK for a comprehensive review, here is a specification comparison to give you an idea about how these motorcycles stack up against each other.

The CFMoto 650NK and the Z650 stick to the quintessential naked bike design with beefy tanks and slim tail sections. The engines are exposed and a few sections of the chassis are also visible in the case of the Kawasaki. The Z650’s green frame paint shade does stand out more as it contrasts well with the body colour.

A look at the dimensions shows the CFMoto is slightly larger than the Kawasaki – the former is longer and taller than the Z650 and is expected to have better road presence.

Both motorcycles are powered by a 649cc, liquid-cooled, twin-cylinder engine. While they have the same number of cylinders, if we were to follow old-school nomenclature, the Kawasaki’s motor is a parallel-twin while the CF Moto’s mill is an inline twin. To better explain the difference, both pistons move up and down the cylinder at the same time and in the direction in a parallel-twin configuration. Thus, the crankshaft angle is 360 degrees. In an inline-twin engine, the pistons move in opposite directions at any given time. In this case, the crankshaft angle is 180 degrees. However, not all manufacturers strictly follow this system of nomenclature in these times. For example, Royal Enfield calls its 650cc engine a parallel-twin as well, even though that motor uses a 270-degree firing order.

In terms of power, the Kawasaki has the edge. First, its motor produces 7hp more than the 650NK’s and second, peak power arrives a whole 1,000rpm earlier as well. But that’s not all. The Z650’s engine produces nearly 10Nm more torque than the 650NK’s.

When you consider the Z650’s lower kerb weight and, consequently, better power-to-weight ratio, it should be the quicker motorcycle of the two. We shall, however, confirm this after putting the CFMoto through its paces.

The Kawasaki employs a steel-trellis frame while the CFMoto has a tubular chassis that the company claims is made using ‘lightweight, yet high strength alloy steel’.

Both motorcycles use a telescopic fork and a monoshock. Look closely and you’ll see that the monoshock on the 650NK is mounted off-centre, just like the previous-gen Kawasaki ER-6n. They also have the same wheel and tyre sizes but the CFMoto has a 5mm longer wheelbase.

At Rs 3.99 lakh, the CFMoto 650 NK comes across as great value considering the equipment on offer. If you aren’t looking for outright performance it’s got enough juice, on paper, to keep you entertained. However, the Kawasaki Z650 is clearly a step ahead of the 650NK in the performance department. While the Z650 is a faster motorcycle, in theory, you end up shelling over Rs 1.5 lakh to purchase it. CFMoto is a completely unknown brand in our country at the moment and they have a lot to prove in terms of their motorcycles and aftersales experience. For now, these two motorcycles are closely matched on paper and only a proper comparison test can decide the winner.

0
No one would blame Nissan if it had killed off the Versa subcompact. Its current generation has been frumpy and mediocre since it was...
Read more