Spending a year with a vehicle has a way of uniting opinions, even in a group as diverse in their automotive predilections as the Automobile staff. But that wasn’t the case with the 2018 BMW M550i xDrive: After 13 months and 18,411 miles, our opinions about the car that social-media editor Billy Rehbock nicknamed the “Rocket Couch” are every bit as divided as they were when it arrived. Not that anyone disliked the car, but we remain firmly split into two camps: Those who think the M550i is good, and those who think it isn’t quite good enough.

“I could drive this all day, every day, in every situation,” wrote executive editor Mac Morrison. “Drove from L.A. to Scottsdale, and there couldn’t have been a better car for the trip,” said features editor Rory Jurnecka. All in all, we found it to be a great car for a long haul as it eats up the miles smoothly and comfortably and has plenty of passing power in highway situations.

So what’s the problem? Morrison summed it up with a rhetorical question: “Would I buy one? No, because while I never found anything about it I particularly disliked, there’s also nothing particularly exciting about it.”

What complaints there were mainly centered around the car’s lack of driver appeal (a surprising thing to find ourselves saying about a BMW). “I can have at least some fun tossing just about any car around, including this one.” Morrison explained. “Yet the steering is bland, and it’s a large, heavy car so there’s not a lot of incentive to seek out a flowing back road to drive just for fun. Not that it’s a giant bore; there’s an immediacy to the M550i’s responses that isn’t present in some of its rivals. It’s just not what many of us wish it was. There are other cars that deliver a load of luxury while also including some real character and excitement.” 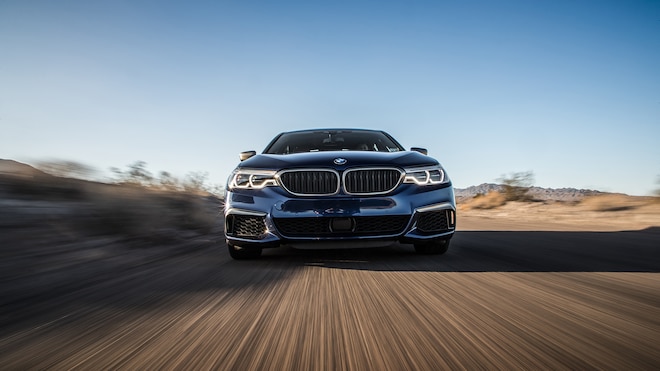 Senior editor Nelson Ireson was his usual blunt self: “I’ve spent a year trying to learn to like the M550i, but for the life of me I just can’t manage it. The M550i isn’t a fundamentally bad car. It’s actually a lovely vehicle if you want a large, powerful cruiser. [But] it’s not quite as comfy as it could be, nor does it handle or steer exceedingly well.”

Were we expecting too much from the Rocket Couch? The “M” on its rump has certainly been a point of contention. Time was the M badge was reserved strictly for the top-performing models like the M3 and M5, but now the M has moved downmarket. (BMW isn’t the only automaker guilty of this, by the way; Mercedes now does the same with its AMG lineup and Audi has dialed back the sharpness of its S cars as more RS models join the ranks.)

“Maybe if BMW simply dropped the M and called it the 550i, we’d be a bit more accepting,” contributor Marc Noordeloos wrote about the car during last year’s All-Stars competition in which our Four Seasons car competed. (It didn’t make the final cut.) Morrison disagreed. “Large, modern, non-M BMWs of this car’s era are a different beast compared to what they were years ago,” he wrote.

It’s not like we didn’t give the M550i every possible chance. We ordered it with the $3,600 Dynamic Handling Package, which includes an adaptive suspension, active roll stabilization, and active rear-wheel steering. Drop the accelerator to the floor and the M550i is happy to remind you there’s a 456 hp twin-turbo 4.4-liter V-8 under the hood. But its mild cruising manners have a way of lulling one into forgetting all that hardware. Overall, we found it to be a little too much Clark Kent and not quite enough Superman. 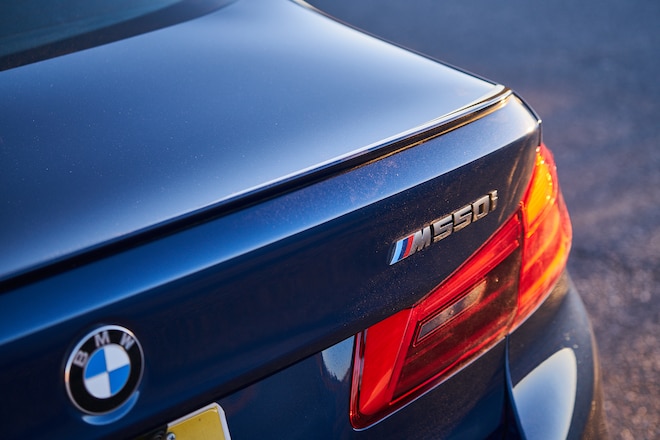 While some 90 percent of the comments in our logbook centered on the M550i’s driving experience, a couple of editors did devote some ink to the car’s other features. “I’m not sold on the fancy gesture controls,” wrote online editor Ed Tahaney, referring to the ability to manipulate the stereo and climate systems by waggling one’s digits in just the right way. “It’s easier to just turn a knob on the stereo. I stretched my fingers and changed the station by mistake.”

Though several editors concurred with Tahaney about BMW’s gesture control as being little more than a gimmick, there was praise for the advanced head-up display, the availability of Apple CarPlay via Bluetooth, and wireless charging for iPhone 8 and higher. That said, Android-based phone owners are SOL as BMW has said it has no plans to add Android Auto support.

Editors also found the M550’s safety nannies and other semi-autonomous features to be a mixed bag. “One thing I absolutely abhor,” wrote Morrison, “and this isn’t exclusive to this particular BMW, is the surprisingly heavy-handed reactions of the lane-keep assist. If you leave it switched on and dare to stray into the road’s painted lane lines, be prepared for the force with which the car will kick itself and the steering wheel back in the opposite direction. It’s quite jarring, and can be disconcerting.” 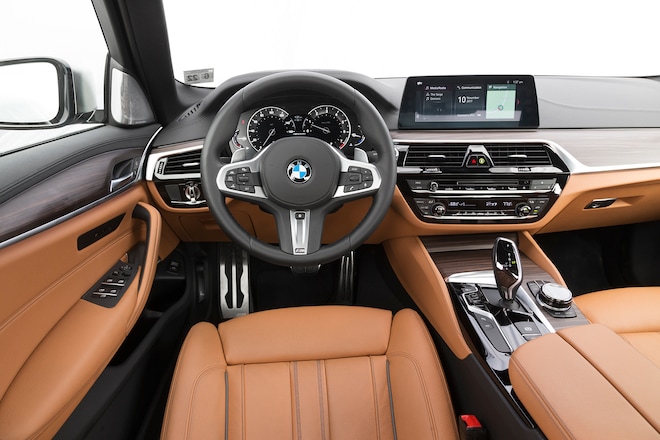 Yours truly, however, had fun playing with the M550i’s adaptive cruise and lane-keeping system. Other cars with similar setups look for torque applied to the steering wheel to determine if you’ve taken your hands off, which can lead to annoying false positives on long straightaways. The BMW system actually senses if you’re touching the wheel, so it’s more accurate. That said, it’s kind of fun to let go and wait for the alert: The animation on the dash of ghost-hands gripping the wheel made me chuckle every time.

As far as the ownership experience goes, we have nothing but praise. BMW’s Ultimate Care program covers all routine maintenance for 3 years or 36,000 miles. Care and feeding of an expensive German sport sedan can get pricey, and yet we had the car serviced twice and paid nothing. Along the way we had a couple of small issues—a “Check Control” message and an occasional phantom passenger-seat-belt-not-fastened chime—and both were put right under warranty at the 10,000-mile service, as were a couple of service bulletins.

We had one biggish issue at just south of 4,000 miles, when one of our staffers noticed that the Michelin Primacy tires up front were beginning to delaminate, so we swapped them out. We had no problems with the rear tires, so we wrote this one off as a fluke.

Just after the car’s first service, someone hit our BMW in a parking lot, damaging the passenger-side quarter panel. The repair bill came to $1,461.60. And not long after the clock wound past 12,000 miles, a piece of plastic pipe flew off of a truck on the I-405 freeway and straight into the BMW’s windshield—a day before it was scheduled to head out on a road trip to Arizona. We made it there with the wounded windscreen and later had Chapman BMW of Phoenix replace it, but we were surprised by the $1,281 bill. Turns out the reflective coating for the BMW’s head-up display makes for an expensive piece of glass. (Apparently, this is the new normal: When our Four Seasons Volvo V90 suffered a cracked windshield, the bill topped $1,500.) 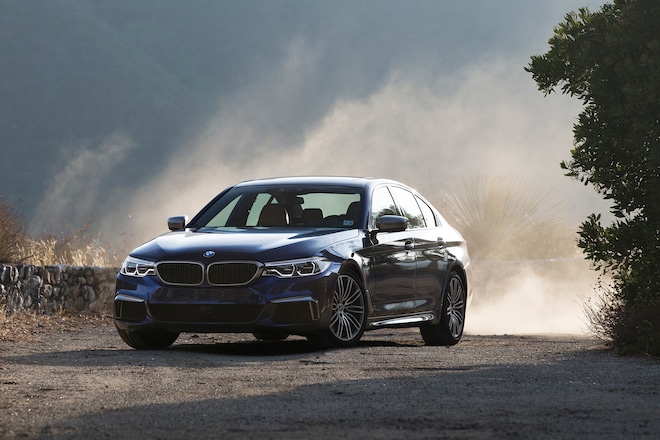 Speaking of dollars spent, we pumped more than a grand’s worth of premium unleaded into the M550i’s 18-gallon tank, averaging 17.9 mpg. That’s a fair bit short of the EPA estimate of 20 mpg combined, but that single number doesn’t tell the whole story. Our Four Seasons cars spend a lot of time in stop-and-go Los Angeles traffic, where a V-8 engine is at a distinct disadvantage. On road trips, the BMW consistently returned numbers in the mid- and sometimes upper-20s. If you’re inclined to cruise at the speed limit, the M550i can hit 30 mpg. It just so happens that we were rarely so inclined.

And so the M550i leaves in its wake a crowd of devotees and detractors. If you poll the Automobile staff, you won’t find a single one of us who would deny that the M550i xDrive was a perfectly good car.

“Personally, this car fits me,” said editor-in-chief Mike Floyd. “I dig its presence, character, and amenities. If I were an executive of a certain means and had just south of 90 large to blow on a sedan with enough—just enough—room for five, I’m leaning its way.”

But given that hefty price tag, is simply being perfectly good really enough to part with all that green?

Once again, Ireson sums it up best: “For my money,” he wrote, “the standard 540i is just as interesting (which is to say: not very) and considerably less expensive. The M5, on the other hand, is a BMW is all the best senses, and not very much more expensive. The M550i is the odd car out.”

While we may still be a house divided, that’s a sentiment that we can (mostly) agree on. 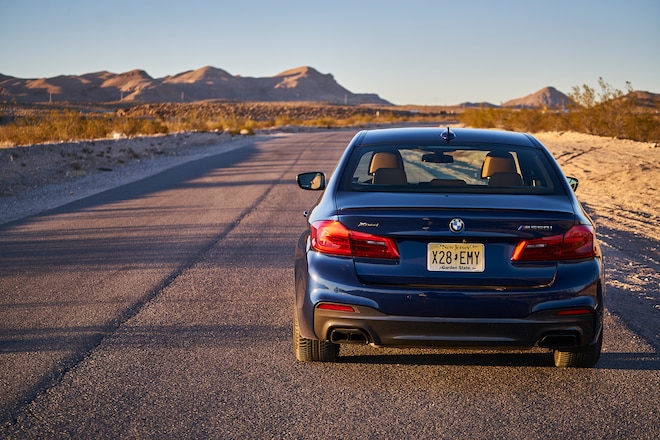 0
The 2019 Ford Ranger has finally been evaluated by the Insurance Institute for Highway Safety (IIHS) and it narrowly missed getting the organization’s top...
Read more
ARTICLES

Take a look at this six-wheeled truck: the Hennessey Goliath 6×6

0
https://youtu.be/5w6KcWzJdvc We first heard of it last year, but now it's here! Following the success of the company’s VelociRaptor 6X6,...
Read more
ARTICLES

Does the VW GTI TCR Live Up to the Hype?