No one would blame Nissan if it had killed off the Versa subcompact. Its current generation has been frumpy and mediocre since it was launched seven years ago, and didn’t exactly get better with age. Add to that the simultaneous rise of crossovers, the fall of sedans, and low profit margins for subcompact cars, and it seems like a no-brainer for the chopping block. Yet, Nissan is giving the Versa another shot here in the United States. Just as surprising, the 2020 Nissan Versa is actually a serious contender for best in its segment with attractive styling, a spacious cabin, solid driving dynamics, and a good value proposition.

While styling isn’t the most important thing about a new car, it’s impossible not to bring it up in regards to the Versa, because it’s one of the single biggest improvements. The old model was tall, narrow, lumpy and all around awkward. That’s all gone in favor of a body with crisp lines, a lower roofline and a wider stance. Some of this appearance comes from styling tricks like wider lights, but the car is physically changed in these areas, too. It’s 2.3 inches lower than the previous generation, 1.8 inches wider and 1.6 inches longer. It’s still not the most distinctive looking car, seeing as its grille and floating roof design are taken straight from the Altima, but that actually contributes to its more mature, attractive appearance.

The interior underwent the same kind of transformation. The previous-generation Versa’s interior was a mountain of cheap, hard plastics globbed together. The new Versa’s interior features a low dash taken almost directly from the Kicks, which still features hard plastics (it is a cheap car after all) but also has highlights that help bring it far upmarket such as padded dash panels with stitched, quality vinyl on the SV and SR; chunky, aluminum-look knobs; and a unique floating screen. The SV and SR trim levels each feature stylish cloth upholstery with contrasting colors and unique patterns, while the base S trim gets fairly plain upholstery and plain plastic dash. 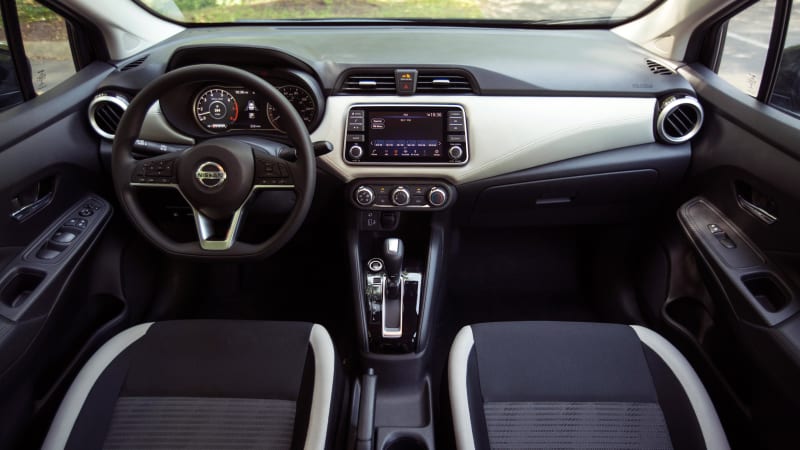 Thankfully, Nissan kept the Versa very roomy for a vehicle of its diminutive exterior dimensions. Front head- and shoulder room shrank by half an inch and an inch respectively, but front leg room is up a remarkable 2.7 inches, and these numbers keep the Versa at about the top of the class for front seat space. Beyond the numbers, it’s easy to find a comfortable seating position thanks to that leg room and a tilting, telescoping steering wheel with a large amount of adjustment.

And despite there being less headroom than before, there’s still plenty of it. The Versa also allows the driver to sit fairly low and in line with the steering wheel, unlike the similar Kicks that forces you to sit high up while leaving the steering wheel awkwardly low. The Versa’s seats are thickly padded, which made it comfortable for our short test drive, and they should probably work well for longer jaunts, too. The only real complaint for up front is that there isn’t much room for knees width-wise, so there’s a decent chance you’ll be resting them on the center console and door.

Moving to the back seat, the new Versa has lost some space, at least on paper. Headroom is basically the same and shoulder room is up 1.7 inches, but legroom is down a shocking 6 inches to 31 overall. That’s less than even the Kia Rio. This is odd, considering the new Versa has a longer wheelbase than the old model. Some of it may have been lost to expand legroom for front passengers or the result of some change in measurement method, but Nissan didn’t provide an explanation. Despite this apparent loss of legroom, though, your nearly 6-foot author could sit behind himself comfortably, with just the fabric of the front seats gently brushing against his knees. We have our doubts that there would’ve been 6 inches to spare in last year’s model. It also feels roomier in the back than the aforementioned Rio, so despite the numbers, we’re still going to credit the Versa for having an especially spacious back seat.

As for the seats themselves, they may not be as cushioned as those up front, but they’re still comfortable with a good angle for both the base and the back allowing for a slightly reclined seating position. Behind those rear seats, trunk space hasn’t changed much, with the S trim level having 14.7 cubic feet of space, and the SV and SR trims having 15 cubic feet of space. These figures bookend the old Versa’s 14.9-cubic-foot trunk. 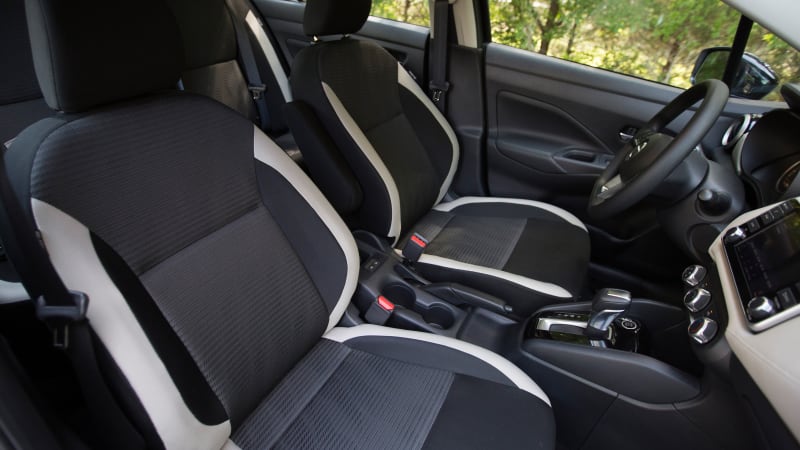 All the exterior and interior improvements in the world wouldn’t mean much, though, if the Versa was terrible to drive. Fortunately, it’s generally good. The Versa absorbs bumps well enough, but our SR test car’s 17-inch wheels made for a firmer ride than expected given the extra-cushy old Versa. It’s possible the lower trims with smaller wheels and more tire ride a little more comfortably. The chassis is very stiff and solid with no creaks or flexing over large bumps. When it comes to cornering, the Versa isn’t so much fun as it is simply secure. Turn-in is a little slow and there’s some mild body roll. But the car is planted, and bumpy corners don’t upset the back end. Steering is accurate and nicely weighted, though light on feedback. Shoppers looking for nippier handling should still probably look at the Honda Fit and Kia Rio instead.

The Versa does have a weakness though, and that’s its engine: a naturally aspirated 1.6-liter inline-four that makes 122 horsepower and 114 pound-feet of torque. That is a substantial improvement over the old Versa’s paltry 109 hp and 107 lb-ft, but it’s still a meager output that’s also saddled with about 200 extra pounds for 2020. The Versa is still a seriously slow car. You’ll want to think twice, maybe three times before attempting to pass someone. The slowness means you’ll be flooring it often, and it’s loud when banging away near redline. To be fair, competitors like the Kia Rio and Honda Fit aren’t exactly burners themselves, but they do have a bit more power.

While the engine falls short, the CVT works very well. It’s responsive to your right foot, moving through its set ratios quickly and smoothly. You won’t miss having a traditional automatic. Also, if you don’t want an automatic, Nissan will still sell you a Versa with a five-speed manual transmission. It’s only available on the base S trim, though, and we didn’t get a chance to sample it.

There’s one other significant change to the Nissan Versa, and that’s price. It’s gone up from the old model’s $13,355 price tag to $15,625. That’s for the base level S with a manual transmission. That’s a big jump, but the Versa is still priced competitively against some of the best cars in the segment. The Hyundai Accent starts a bit higher at $15,925, the Kia Rio more still at $16,315, though it has a standard CVT, and the Honda Fit starts at the high end of $17,120. Going for the base Versa with a CVT adds $1,670. That makes it higher than the Rio and automatic-equipped Accent, but still under the CVT-equipped Fit.

When it comes to standard features, the Versa has a few niceties the competition doesn’t provide as standard, particularly in the safety department. Automatic emergency braking is standard, and not only covers the front, but uniquely the rear as well. Lane-departure warning and automatic high-beams are also standard. The Honda Fit comes standard with comparable safety tech (minus the rear auto braking), while the Hyundai and Kia don’t offer any of those features on its base models. The Versa also gets a nicely sized 7-inch touchscreen, whereas the base Fit, Accent and Rio just have a 5-inch non-touch display with accompanying hard buttons.

However, the Versa still makes a solid value argument at the high end of its range. We drove a fully-optioned Versa SR, which has a starting price of $19,135. That trim includes Apple CarPlay and Android Auto compatibility, leather-wrapped steering wheel, a six-speaker sound system, automatic climate control, proximity entry and push-button start, LED headlights, 17-inch wheels, blind-spot warning, rear-cross traffic alert and rear door alert. It had two options, including a metallic paint for $395 and the Convenience Package for $300 that adds front heated seats and adaptive cruise control, bringing the final price to $19,830. A fully-loaded Kia Rio comes in cheaper at $18,110, but doesn’t have as much equipment. The fully-loaded Hyundai Accent does, but it also costs more at $20,010. The loaded Honda Fit, meanwhile, has a few extra features and a more versatile cargo area, but also costs considerably more at $22,450.

Given this top-to-bottom value and when taken as a whole, the Nissan Versa is a serious contender for the top spot in the subcompact sedan market. The weak engine prevents it from being an obvious best, but that aside, the Versa is an excellent combination of attractive design, useful space, generous feature content and a competitive price. It’s hard to ask much more from a car like this.

0
There's only one place to start with the new Mercedes-AMG A 45 S: the engine. It’s still a four-cylinder 2.0-litre turbo but this time around...
Read more